When my oldest son decided he wanted to be a skunk for Halloween, I had no other choice but to dress his brother in a fox costume. The cutest little fox I’ve ever seen.

I had a hard time finding fabric that was the right shade of “orangey/brown”. I looked and looked but then I found this heathered burnt orange t-shirt in the men’s section at Wal-Mart. I bought two XXL shirts and took them to the cutting table. I used my new favorite pattern again, The Bimaa Sweater for the top. I sewed strips of brown knit to the bottom of the orange before cutting the pattern. And I added the ears before sewing the sections of the hoodie. I used interfacing in the ears but I also did a little extra step to get them to stand up. After the hoodie was sewn, I flattened the ear down and sewed a few stitches right on top. Then I bent the ear back the other way and put a few stitches on the inside of the ear too. They stand up really well now!

For the pants, I used the Fancy Pants Leggings Pattern from Tichy Threads. Another very easy and very satisfying pattern! I used the same method and sewed brown fabric to the orange before cutting out the pattern.

The tail. The cutest little tail ever. It’s just stuffed and sewn right on to an elastic belt that sits under the shirt.

I love that he can wear the top as a shirt later on. My kids love play clothes so I don’t think this week will be the last time I see it :) I also want to make more Fancy Pants Leggings. This kid has a big butt and this pattern fits him great. To say they are excited is an understatement!

Be sure to check out his brothers Skunk Costume too. How many more years do I have left for “themed costumes”?

A few months ago we were  in the car and my oldest announced that he wanted to be a skunk for Halloween. Kind of awesome and pretty random. But I just knew he would change his mind. Then a few weeks later he asked if I made his skunk costume yet (smart boy). He is very in to super heroes so I was still thinking he would change his mind, but then on a trip to Joann’s, he pointed out fabric that would make a good skunk costume. I guess he was serious.

First, I bought a black long sleeved shirt and some black pants. Then I got some back and white fur and thought about how it would all come together. But I spotted this post from Ari where she used Sarah’s Bimaa Pattern to make a Viking Hoodie for her adorable son. Both of these ladies are super talented InstaGram friends of mine :) I knew it would be the perfect skunk head. I already had the shirt so instead of making a new one, I just did a little hacking!

I used the pattern for the hoodie part. I added my little skunk ears before sewing the panels together. Then I used the Bimaa pattern to make a new neckline so the hoodie and shirt would match up correctly. Yall, this pattern is awesome!

I cut a strip from the white fur and sewed a hem around all four sides, that fur is messy business. I pinned it right down the middle and sewed it directly on the shirt (before I added the hoodie).

For the tail I used the fur, batting and a clothes hanger so it stands up! I just used a piece of elastic for the band around the waist and that is what the tail is sewn to.

The best thing is this costume is really comfortable. It’s soft and cozy and I had to bribe him to take it off after out photo shoot!

So there you have the skunk. I love how it turned out! Stay tuned tomorrow for his brother’s costume reveal, it’s another woodland creature… any guesses?

Happy Halloween! If you follow me on Instagram, you probably already knew about our costumes.  I have been procrastinating for weeks. I bought the fabric for capes back in September, I had such high hopes for myself :) Anyway, meet Batman and Robin… 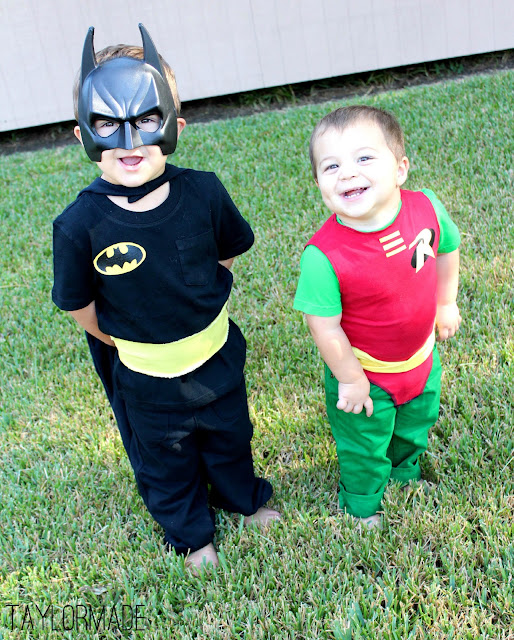 I know I’m a little biased but they look stinking cute! However, that Robin is a little stubborn, he doesn’t like his mask or his cape (or pictures)… oh sure just don’t wear it, its not like I spent any time on it or anything :/ I used green pants and a green shirt that he had and I made the “vest” part. I used an old red shirt that I had and drafted a pattern up using a sleeveless shirt and underwear… go me! Then I used iron on transfer for the logo and the stripes on top. The belt is just yellow fabric on top.

Batman on the other hand would live in his costume if I would let him. I know how much he loves Batman and that is why I made his costume out of normal clothes that he can wear after Halloween. He has on plain black pants and I used layered iron on transfer material on his shirt. Then I just made a separate belt out of yellow fabric. 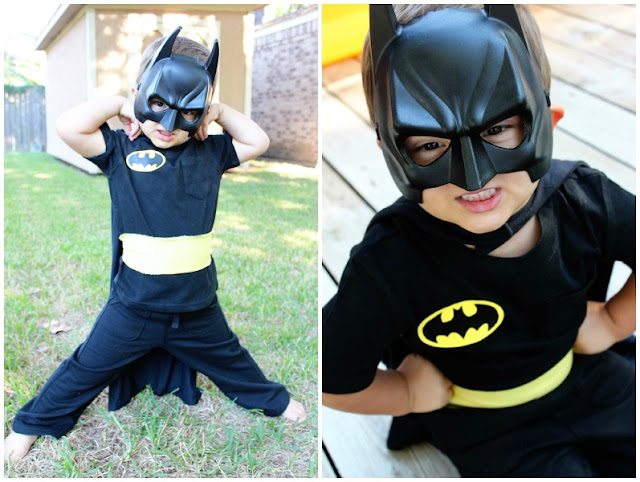 I love the way the capes came out, I used black jersey and used a bib for a pattern around the neck. The logos are just felt. At least one of them loves his cape haha. 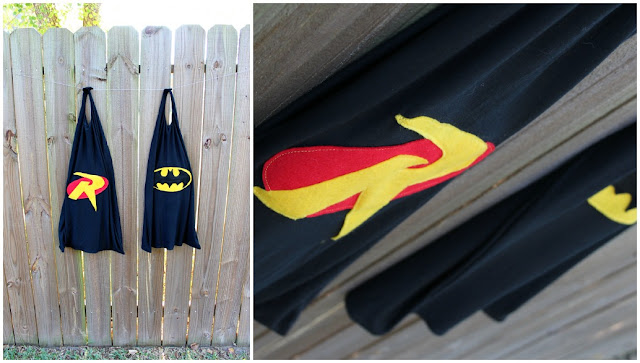 If you are wondering how I ever got two toddler boys to be still for “this long” here is my answer… I bribed. I’m not really above anything for a good picture. 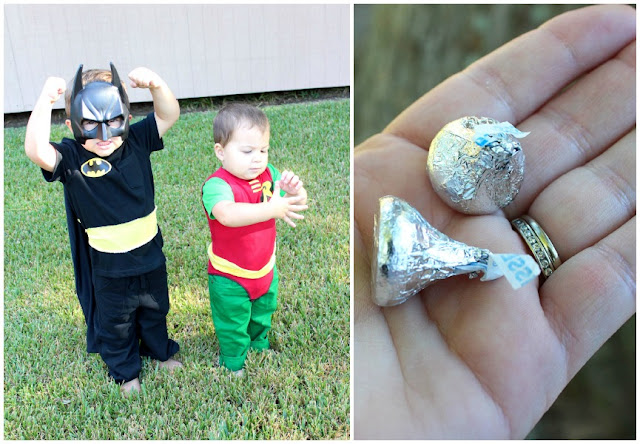 I hope everyone has a safe and Happy Halloween! You can check out last years costumes HERE and HERE. 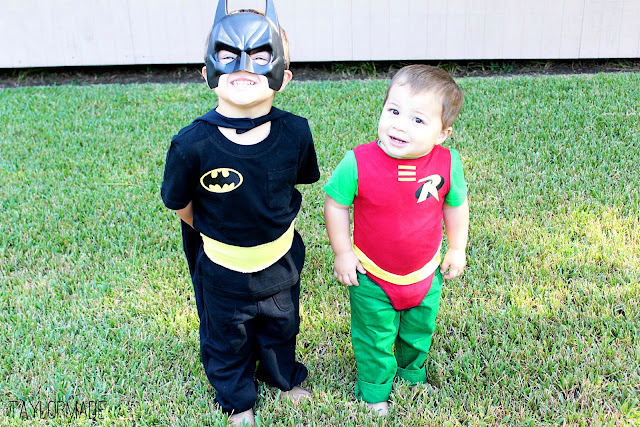 In keeping with our “under the sea” theme this year… Clyde will be fashioning an Octopus Costume :) 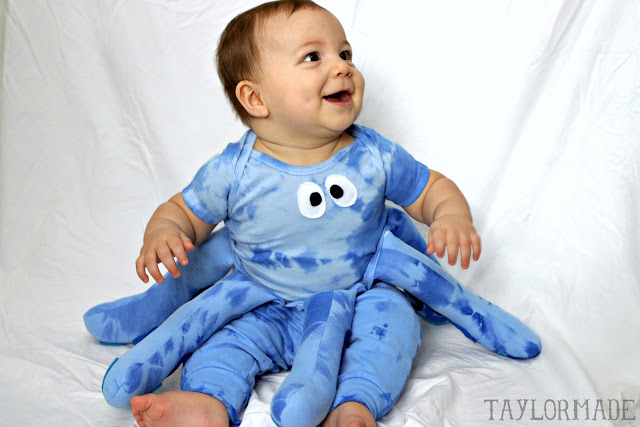 Trying to get a crawling nine month old to sit still for an octopus photo shoot isn’t the easiest of tasks… but we got a few pictures. Just like his brother’s,  I made sure his costume is comfortable because my boys will rip clothes off if they don’t like them. 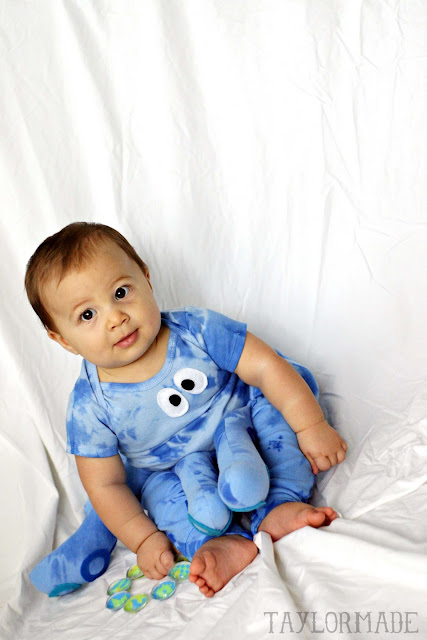 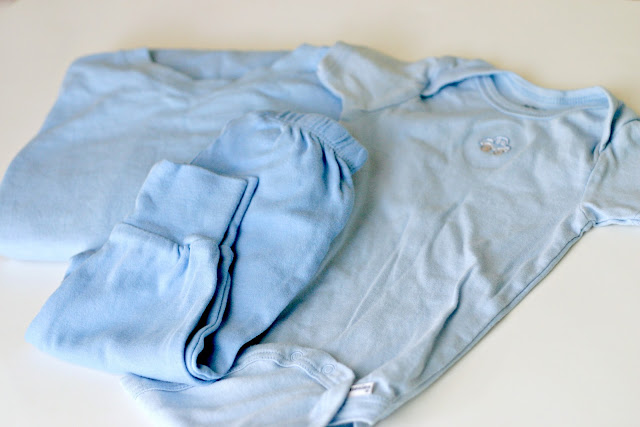 My main problem was that all of the blues were a different shade so I tie-dyed all of them along with Poseidon’s pillow case. Also, I tried to seam rip that embroidered car which almost resulted in a major fail… saved it by adding felt octopus eyes. 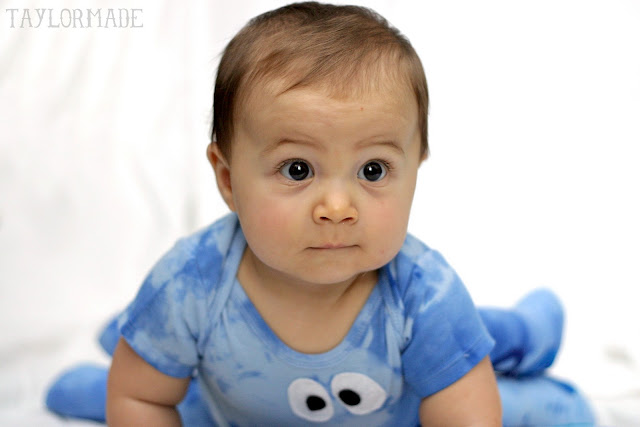 For the “octopus leg belt”, I created a sock shape and cut out 12 halves from the XL men’s shirt. Then I sewed them together but left the tops open. I stuffed the legs and made “bias tape” (not actually on the bias- just from the tshirt scraps). To close the legs, I sandwiched them into the bias tape. The whole belt has a Velcro closure. 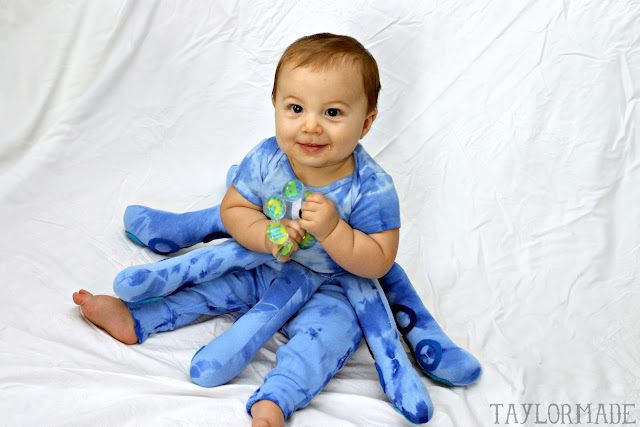 Lastly, I kind of cheated and fabric glued felt “o’s” for the suckers to the back of the legs… I mean after cutting 35 “o’s” out I wasn’t abut to hand sew them on… Halloween is one day people. 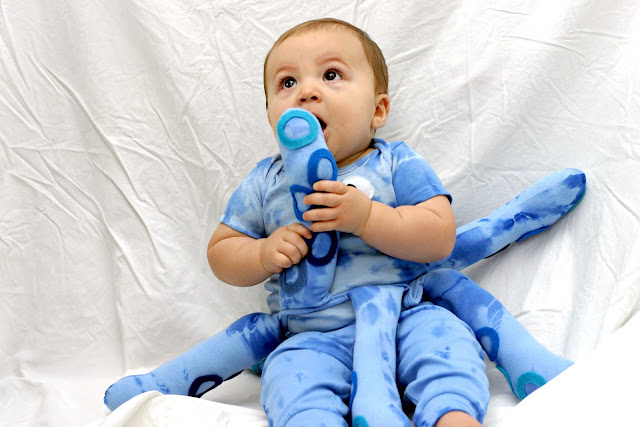 and this pretty much sums up how he felt about this little photo shoot…  bye mom. 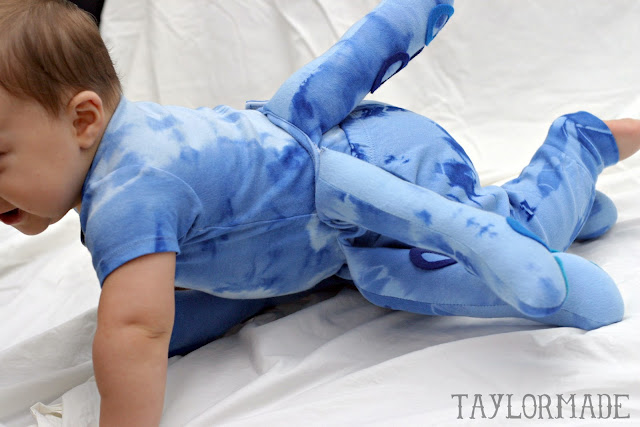 Welcome to Taylor Made